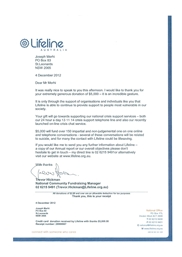 Recently our CEO, Joseph Merhi, attended the Lifeline fundraiser at The Westin, Sydney, whereby Synergy made a large donation to support the organisation and event.
Lifeline Australia provides a national service that addresses suicide prevention and awareness, promotes well-being and is a non for profit organisation that relies on community support. Synergy is proud to be a donor to this cause.

At the recent Lifeline Australia event in Sydney, our CEO had the opportunity to meet with several prominent public figures past and present, who were also showing their support for the cause. 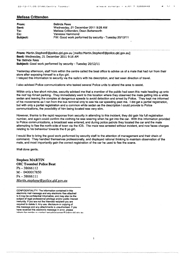 This is a commendation letter from the local police for the excellent work of the Synergy officers on duty whose quick actions resulted in the police being able to apprehend a wanted felon. 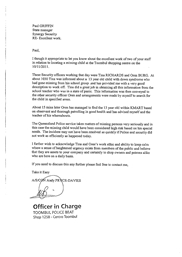 This is a letter from the Officer in Charge at Centro’s Police Beat, commending two Synergy guards on their calm, thorough and professional actions that led to the locating of a missing boy with down syndrome in a busy shopping centre. 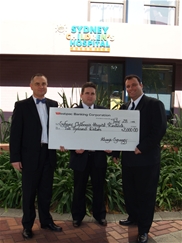 The Sydney Children’s hospital is one of several organisations the Synergy regularly donates money to, including The Cancer Council and the Australian Graduate School of Management.

Recently Synergy hosted a conference with a delegation from the Szechuan Province to discuss Best Practice in the Security Industry.

“We have developed a close professional working relationship with Synergy over the last decade, together we have contributed greatly to improved safety for staff and visitors at St Vincent’s Hospital”
Security Manager – St Vincents Public & Private Hospitals
” Synergy Protection Agency has serviced our needs for some years now and has done so in the upmost professional manner”
Centre Manager – Eastwood Shopping Centre
“Over the last 10 years, Synergy has given us an excellent and professional service; responding immediately and efficiently at all times and in all circumstances”
Director of Nursing – Mater Hospital
“Synergy staff are well presented and trained, respond promptly to issues that arise, and are always available to meet our needs”
Operations Manager – Guildford Leagues Club